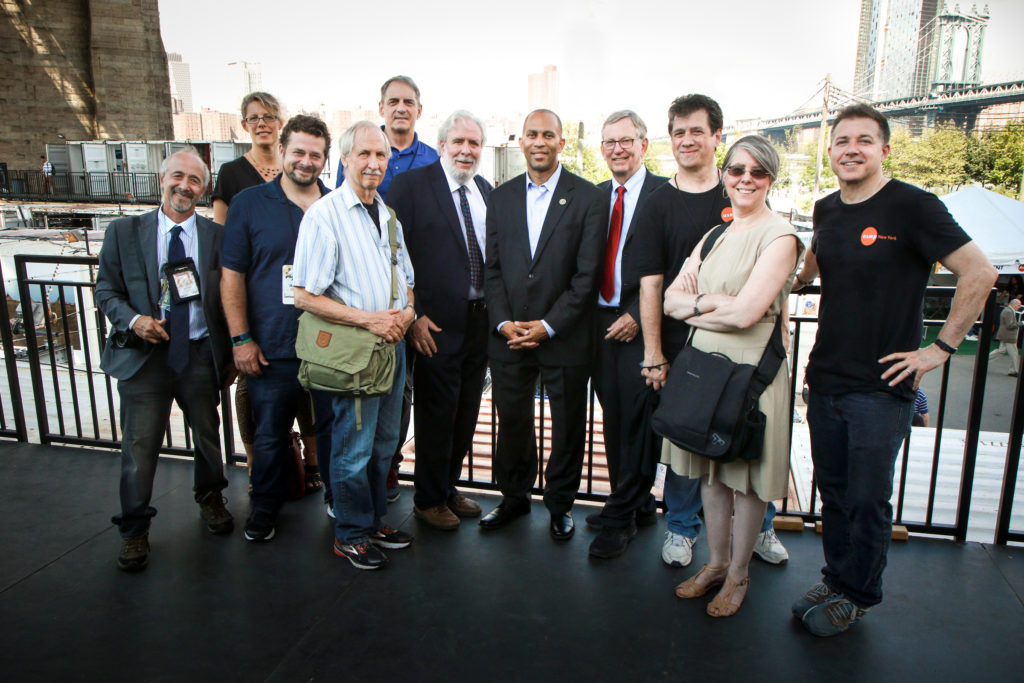 Today, Representative Hakeem Jeffries (D-NY), a member of the House Judiciary Committee and a leading and ardent supporter of legislation to create a copyright small claims court took a tour of Photoville, the annual outdoor photography festival at Brooklyn Bridge Park showcasing the creative efforts of many professional photographers.  ASMP, through the efforts of its executive director, Tom Kennedy, arranged the tour, and was joined on it by local NY Chapter members and representatives from a number of other visual artists organizations, including the Professional Photographers of America, the Graphic Artists Guild, American Photographic Artists, the National Press Photographers Association, and the New York Press Photographers Association.

During the tour, Kennedy thanked Representative Jeffries for his long-standing support to ensure that the copyright law provides small creators with a potent means to take legal action against those who infringe their creative efforts.  “ASMP members are extremely grateful for both Mr. Jeffries’s introduction in the last Congress of a small claims copyright bill and that he will be introducing a revised proposal in the coming weeks.  We are especially appreciative of Representative Jeffries willingness to work closely with ASMP and others in the visual artist community to help ensure that his legislation provides creators with a tool to combat the real-world piracy problems they confront all too frequently.  Today’s dialogue with Mr. Jeffries once again confirmed his deep commitment to working with the creative community.”

Michael Weschler, a former ASMP national board member and an active member of ASMP’s New York Chapter, added that Mr. Jefferies passionate support for the arts was evident throughout the tour.  “Representative Jeffries viewed all of the work on display with empathy, and was especially moved by exhibitions such as the one devoted to the recent events in Charlottesville and those of students being mentored by professional photographers in attendance.  Photographers can only continue to create such works if the law protects them effectively from infringement.  In the absence of such protections, photographers will all too often lack the financial wherewithal to do this kind of work, thereby depriving future generations of such invaluable historical records.”

As always, ASMP will continue to alert its members to new developments on the small claims front.